On Friday last week I was interviewed by Neil Johnson on  Vision Radio. It was a great interview. The main subject Neil wanted to discuss was Prayer and what results when we take it seriously and apply it to all aspects of our lives.

You can hear the full interview on the Neil’s podcast by clicking the link below. Have a listen and tell me what you think in the comment section.

A Road Much Less Travelled

Outside it was dark. Very dark. The dimly lit metal cigar which locals referred to as a bus, lurched between cratered potholes, probing its way slowly forward along a thin black sliver of “road”, which snaked between high white banked snow drifts. No one spoke. Each was wrapped securely in protective furs, companioned by thoughts of self preservation.

Occasionally eyes squinted open to check the temperature gauge. Minus twenty degrees and falling. My cell phone battery had died in the early hours of the morning in deserted Munich Airport Terminal One. There was no recharging facility. Nor was there any wifi available for my laptop. Terminal One is a generation behind most modern Asian airports.

Now, on this odyssey further into the frozen wastes of Ukraine, none of my twenty-two fellow travellers spoke English. There was no way I could communicate with any of them. Nor could I contact those who would hopefully be waiting for me at the airport in Chernivtsi to tell them my flight had been diverted to Lviv, 300 kilometres further north west.

In the normal winter fog and snow in these parts planes do take off. But unless there is clear sight around their destination airport there is no way to land safely. In this region many airports lack the equipment to assist aircraft to land using only instruments for guidance. In such circumstances one plane had already crashed this week.

The gears of the bus, and the night ground on hour after hour. I had no idea where we were or how I would know when to get off or what to do then. How did I get into this? More importantly how would I get out of it 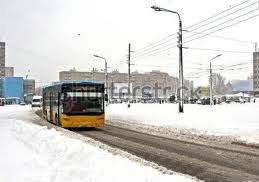 The flight from Melbourne to Munich via Singapore was the usual uneventful twenty three hours cocooned in the care of ever efficient Singaporean International Airline hostesses. A five hour stopover and two more flights would see me arrive at my destination after thirty two hours, to be able to snatch a couple of hours sleep before having to speak at a local meeting.

Anxiety fluttered within as grey fog swirled around the airport. We clambered into a bus to be taken out onto the vast network of runways to board Carpetair flight V3322, which would take us from Munich to Timisoara in Romania. A name like “Carpetair” evoked images of Arabian sand dunes. Maybe flying “carpets” could land on snow drifts as well.

We recognised the whitened outlines of our plane by a man in a captain’s coat and cap banging on the front of the snow covered fuselage with a long handled broom. He was trying to find and clear the cockpit windows.

Briskly we valiant travellers sprinted up the stairs into the darkened plane which seemed somewhat tomb like–as well it may become. The captain kept enthusiastically bashing away outside. Fortunately all passenger windows were iced over. This would be a ride of blind faith in more ways than one. Satisfied with his efforts, the captain stomped the ice off his boots, boarded our craft, left the hostess to wrestle the door closed and disappeared into the maze of lights under his control. Not only did he permit us to view his cockpit dexterity, he even favoured us with a little lighting in the main cabin.

Because not many passengers had braved this flight, the regulation four person crew seemed to be reduced to two. Perhaps the lightened load would keep us aloft longer and make landing easier. At the press of a button, propellers sluggishly turned till engines snorted out ice and thundered into life.

With props at noisy speed we trundled past all those boringly predictable ultra safe international jets lined up as if in a passing out parade salute to bid us bon voyage or fond farewell. Not for us a common Boeing or Airbus, We were privileged to ride the finest Fokker 100 still flying. It seemed unfortunate that the worthy Fokker aircraft company had gone out of business some years previously. I’d last flown in one back in the 1970’s. Still I took comfort in the thought that Dutch engineering was as sturdy as that country’s citizens. Besides, there must be a supply of spare parts in some shed somewhere. How else could this plane still keep flying? How indeed!

As we climbed towards out cruising altitude of 10700 meters suddenly the plane started to shudder like a trapped deer caught in the glacial gaze of a merciless tiger about to pounce. In such instances, the deer is soon despatched out of its misery. Not so for the passengers of flight V3322.

Still the shuddering served good purpose. It cracked the thin filament of ice in the cardboard cup I held so I could see into the blackened murky depths below, 2.5 cms of the finest Carpetair cold coffee, served to steady the nerves of the less courageous among us. It also cracked the ice on the outside windows so I could see the comforting insignia on the engine cowling -RR. These were the famous dependable Rolls Royce workhorses. Nothing to worry about here.  Shuddering still we thundered forward. Come to think of it, Rolls Royce was the same company that supplied the engine which blew apart shortly after taking off from Singapore’s Changi airport on a Qantas Airbus 380 in 2011. Perish the thought. Our engines were of older more reliable vintage.

By luck, good fortune or providence we landed at Timisoara. This was the hub and headquarters of Carpetair. At least five other “carpets” were parked on the tarmac ready to welcome us.

Two hours later, after not a little confusion as to from which gate to board for the final leg of the journey, we were airborne once more, this time in a Saab 2000. We had entered the jet age. Alas Saab is another company which also went bust some years ago. Perhaps with time, vintage planes, like Bugatti cars, increase in value as collector’s items and if only Carpetair had realised this, they could have been in for a killing in more ways than one.

Then came the unanticipated, much dreaded announcement over the muffled intercom system.

Owing to inclement weather at Chernivtsi we were being redirected to Lviv. At least we would avoid some time wasting machinery inspector who might have been lurking at the airport to try to uncover the mystery as to why our on board coffee machine was producing lovely cold coffee again.

Lviv airport is amazingly modern. It sparkles against the stainless steel sky. It’s nearly the same size as Melbourne’s Tullamarine airport. There are a couple of differences. Saab 2000 Flight V3811 was the only plane at the glittering terminal. And there was no electric lighting inside apart from at one or two counters. Reflected light filtering through snowy windows would suffice. If it was good enough for Santa, it would be good enough for me and my intrepid fellow travellers.

But the question looming in my mind was, what now? No English was spoken, but I was able to follow the rest of the passengers. They seemed to know what was afoot. They piled into the aforementioned bus. So did I. Where to now? There can’t be too many towns in this part of the world.

Some hours into the kidney stone crushing journey, at about 11.00 pm, I thought of a verse in the Bible. Jesus said,” Ask and it will be given to you, seek and you will find; knock and the door will be opened to you.” (Luke 11:9) While I certainly didn’t want that bus door to open and let in more cold air, I did need help. So in faith I asked, “God, I’m asking you for your help and guidance. Without some minor miracle I could be forever refrigerated in these frozen, trackless wastes, only to be discovered 1000 years from now by some archaeologists looking for more of those extinct elephants.”

As I asked and prayed, I noticed suddenly up front a dull glow in the hand of a stirring body. It looked as if it could be an iPhone4. In some remote places cell phones are prized not for use as phones because there is no reception but to take photos and to listen to music. “Lord I’m asking for a phone and for reception,” I prayed.

With rising faith I pulled a scrap of crumpled paper from my pocket on which were written nine digits. No name. Just numbers.

Putting legs to my own prayers I stumbled toward the dull blue glow of the phone. I gesticulated toward the phone and my numbered piece of paper. I wondered if I looked too much like a threatening Mafia figure in my long black coat and if so, would the phone person be too frightened to respond. For whatever reason, the phone was surrendered to me. Numbers punched in. I waited.

A voice came on line wanting to know where I was and at what time would I be arriving. I couldn’t give an intelligent answer to either query, but as I handed the phone back the phone owner, I said another prayer. An hour later the driver signalled to me to alight. I was the last person out. But there was one other. The phone owner.

With my luggage beside me on the ice, the town clock signalled midnight. I was all alone. Then the phone owner reappeared and signalled me to get into a car. I was dropped some distance away at a bus station. Still no one to greet me.

Within a matter of minutes a van rumbled up and slid to a stop. Out popped a cheery gent calling my name. He had been waiting elsewhere. The bus had dropped us at the train station instead of the bus station.

After 43 hours the adventure was over. Nothing more to worry about, until I needed to depart for my next destination five days later.

I thought once more of the immortal words of Jesus about the pointlessness of worry and how God has everything under control for those who trust him [Luke 22-34]. Good words to think about, as I drifted of into the oblivion of sleep and snow filled dreams.