Keysar Trad gets himself into more verbal dust-ups than Queensland’s best-known former Federal MP, Clive Palmer. The two could almost compete in the number of court cases in which they have been involved.

Trad is the president of the Australian Federation of Islamic Councils (AFIC). He seems to specialize in making that which is simple and straightforward suddenly become complex and difficult to understand. It usually happens as the luckless Trad tries to make some Islamic teaching that strikes non-Muslims as offensive or shocking mean something other than what it obviously states. Recently there was the issue of whether or not Muslim male students should decline to shake hands with females who were presenting them with awards at the Hurstville Boys campus of Georges River College. 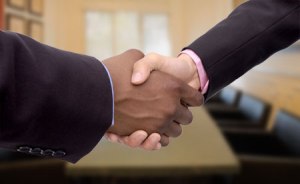 The Department of Education, seeking to promote “open and tolerant attitudes” approved the school’s decision to allow Muslim boys not to shake hands with females who were presenting awards to them. It’s difficult to see how such a practice promotes “tolerance and openness”.

Declining to shake hands with females is based upon a saying of Prophet Mohammad (a Hadith) in which he said, “For one of you to be stabbed in the head with an iron needle is better for him than that he should touch a woman who is not permissible to him.”

This Hadith was narrated by al-Tabaranni in al-Kabeer 486. The implication is that such touching may lead to temptation and immorality.

A Sahih Muslim Hadith also confirmed that Prophet Muhammad never touched the hand of any woman in accepting their oaths of allegiance as referred to in Q 60:12. The Prophet is described as “the infallible one, the best of mankind, the leader of the sons of Adam…”. (https://islamqa.info/en/21183)

That should have settled the matter. Muslims are expected to follow the example of the Prophet regardless of how strange that may seem to contemporary infidels. To make the practice appear less embarrassing Mr Trad stepped in and reportedly said, “Many Muslim scholars had come to interpret the hadith to be a reference to ‘unwelcome harassment’”. But there is no hint of this in the original references.

A few days later in the same week once more Mr Trad was trying to make the unacceptable acceptable. It’s often difficult to try to reconcile 7th century unchangeable Islamic “revelation” with 21st century non-Muslim practice. On this occasion Mr Trad inadvertently sparked controversy when during the Bolt Report on Sky News he said that in Islam a husband is allowed to beat his wife.

He was referring to Q 4:34 which states “men are in charge of women because Allah has made one of them excel the other.” No prizes given for guessing correctly that it is the male who “excels.” The verse goes on to outline the male response should a wife countenance disobedience to her husband. In that event the husband will firstly “admonish” his wife. If the desired change is not forthcoming he is next to banish her from the marriage bed. Should she persist in her defiance she is to be “scourged”. (The Meaning of the Glorious Koran. Trans. Mohammed Pickthall)

In Kazakhstan this advice is regularly implemented. Above the low set door that is the traditional entrance to each house, a small whip is kept in full view and within easy reach. Each Friday according to local Muslim custom, the whip is taken down and is used to beat disobedient women of the household. Kuwaiti scholar Jassem Al-Mutawa favours using a rod and keeping it in a prominent place on view in the home to remind (women) what they can expect should any lapse into disobedience.

But there was no report of anybody attempting to reinterpret the Quranic authority that supported Mr Trad’s original assertion. And why would there be? Every Muslim knows that it is not permitted to forbid something Allah has permitted. Saudi scholar, Dr Abdul Rahman al-Sheha, reportedly rationalised such widespread practices by suggesting “submissive or subdued women…may even enjoy being beaten at times as a sign of love and concern.”

To learn more about Islam and women go to drstuartrobinson.com/books , “The Hidden Half…” and follow the prompts.

Filed under Woman and Islam